About Scout Scar: Looking into a Cumbrian Landscape
By Jan Wiltshire 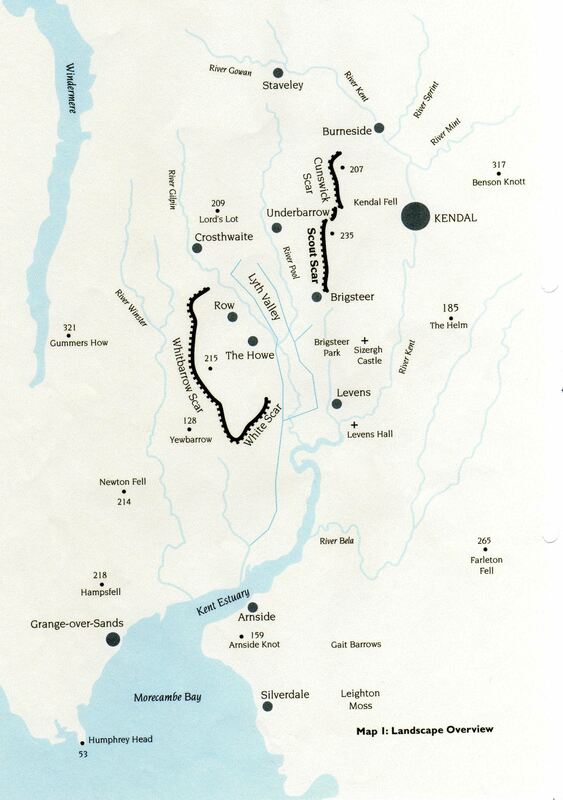 From   About Scout Scar, landscape overview
On its swift, short course to its estuary at Morecambe Bay the River Kent flows through the market town of Kendal which is situated on the north-eastern edge of a belt of limestone hugging the volcanics of the central Lake District. The Kent estuary penetrates these Morecambe Bay limestones , the character name by which the area is known, and there is a diversity of limestone features including a series of escarpments; Hampsfell, Yewbarrow, Cunswick Scar and Scout Scar, the latter being about two kilometres west of Kendal. Each of these escarpments has a north-south alignment, with its scarp slope facing west, its dip slope to the east.
This area of carboniferous limestone was subject to the scouring of glaciation during the Ice Age. Limestone is permeable and fast-draining, due to its network of open joints, so once the last of the ice had retreated and the permafrost had gone there was little further surface water erosion.  The dry valleys which characterise the landscape would have been deepened during the period of glaciation.  There is little standing water on these uplands and the aerial view shows outcropping bands of rock above the cliffs of the Whitbarrow scarp and extensive exposed limestone on the broad ridges of Whitbarrow and Scout Scar. This often occurs as frost-shattered rafts of clitter, conveniently to hand for the building of the dry-stone walls whose signature is the sharp edges of its pure white limestone and the grey and black lichens associated with this alkaline rock. The glaciers transported much debris, including weighty objects and, as the ice melted, deposited them onto the scoured limestone bedrock so that a boulder of alien rocks sits on a limestone plinth, like a sculpture.  These glacial erratics have bright lichens that indicate acid rock.  Glaciers dumped their boulders but carried finer debris  out to Morecambe Bay, and silts and sands were blown onto Whitbarrow and Scout Scar to form pockets of loess in dips and hollows of the limestone. In these acid soils heather grows and offers shelter and a micro-habitat.
At 235 metres Scout Scar is marginally higher than Whitbarrow (215 m) and Hampsfell (218m) but each offers magnificent views of the surrounding countryside.
These ridges and escarpments are exposed to the prevailing south westerlies which, on Whitbarrow especially, create wind-blasted yew trees that resemble dark pennons. With no standing water, poor soils and lack of nutrients, scattered trees grow stunted amongst rafts of limestone clitter and there are native juniper, yew and hawthorn on the broad ridges.

Whitbarrow
Whitbarrow- the white hill- and to the south the dramatic cliff of White Scar. In sunlight, light bright Whitbarrow. There are a few clusters of larch and birch but it is an open ridge with blue moor grass, a spring and summer flush of limestone flora and a wealth of butterflies. Sections of the cliffs and screes of its scarp slope are concealed by hanging woods. On gloomy days, these limestone escarpments have a somewhat forbidding appearance with dark yew rooted in fissures in the rock face, and Black Yews Scar, below Lord’s Seat, is an evocative name. East of the viewpoint of Lord’s Seat, the dip slope is broken by a series of minor stepped limestone scarps  with yew and juniper rooted into the rock and swept and sculpted into strange shapes. And above each shallow cliff there is a shelf of limestone pavement with clint and gryke formation. Hampsfell and Whitbarrow  have open and wooded limestone pavement , a habitat of  which scout Scar has only vestigial traces.  Hidden within the trees on Whitbarrow is Gillbirks Quarry which provided building stone for Kendal. Farms, and the famous damson orchards of the Lyth Valley, are situated low on the sheltered dip slope at the spring-line where permeable limestone is down-faulted against impervious Silurian slates and greywackes. The hamlets of Row and The Howe are surrounded by an intake wall and fields whose old boundaries have all the quirks and irregularities of  an English landscape. 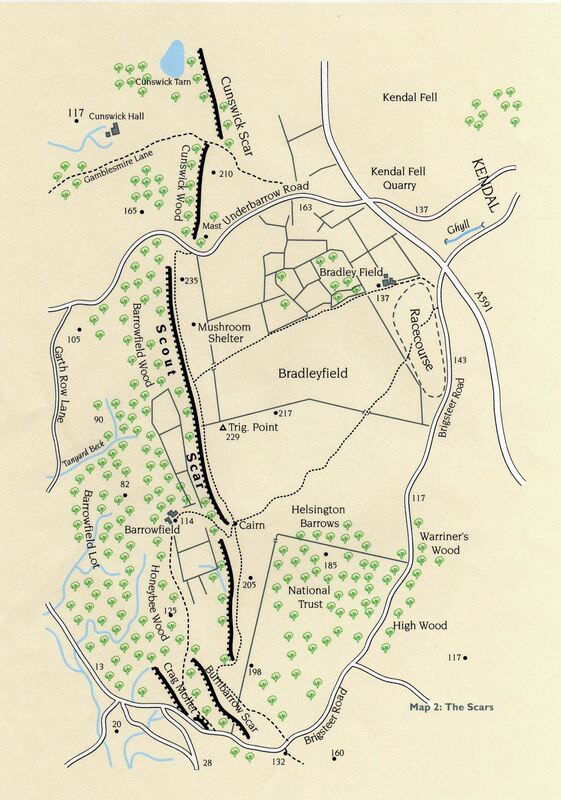