Stronsay, the Vat of Kirbister is a gloup north of Odin Bay.  A gloup (‘throat’ in Old Norse) is formed by the sea widening a geological fault line, creating a cave whose roof eventually collapses, to form a cauldron connected to the sea . Sea water pours beneath a fine arch into the great vat and sunlight reflects off the water and warms and illuminates shelving strata,  rock colourful with lichen and algae, and the ooze, trickle and seepage of mineral wash on old red sandstone. On the opposite curve of the vat, a flank of gloomy cliff plunges into an inky black sea. These cliffs are the spring-into-summer tenancy of nesting seabirds.
Shag sentinels at the mouth of the Vat. A colony dispersed on cliff-face nests. A coin of vantage, an angle of rock, daubed white with shag shit,  brownish nests of a loose weave and black shag brooding.  A nest is woven with green bailer twine. Bright green algae stains the rocks where guano splash does not reach. We can see the breeding crest on the males, that startling green eye, the yellow gape and dark bill, the grey webbed feet and the green sheen on their scale-like feathers. A creature of myth, a familiar for Loki the shape changer. Yellow gape and yellow lore: the skin where bill meets facial plumage. Shag preen each other and sit on their nests brooding their young.Their deep grunts resonate about the Vat of Kirbister. Storms gnaw away at the rock and have taken a bite out of the fine arch, to wear a groove and channel that in time will give way. It’s dynamic architecture, constantly fretted by wind and waves.
The cliff top is a layer of grassy and floral turf and we lean out and peer at the water far below  where a flotilla of black guillemot in the throat of the Vat of Kirbister bobs on water rippling like beaten pewter that catches and relects sunlight , water so metallic-opaque in a trick of the light that there is merely a hint of  those paddling red webbed feet. Two white crescents mantle the dark  plumage of each bird  and a wake of ripples charts their course through the water. The wind has dropped else we could not have picked up their whistling call. The geo is the habitat of the black guillemot, a deep and narrow rock fissure where light filters to the depths with rock shelf of algae and lush vegetation, dank and dark. Black guillemot. sombre birds for the shadowy geos, until they fly with a flash of  pure white scapular markings, or in a shift of posture give a glimpse of scarlet feet, or scarlet gape.
You beckon me, urging me to come to you and make no sound. A pair of birds shelters under an overhanging mass of pink- flowering thrift on a rock shelf  below us. Black eyes, black bill with  scarlet gape and scarlet galoshes with claws. We settle down amongst thrift and plantains to watch. If we reached out over the kink in the cliff, over the void, we could almost touch them. So close. We look down into that startling scarlet gape in a sombre face and it’s the proximity, the detail, and the intimate family life all about this beautiful place that makes it such a heady mix. There are fulmar often amidst flowers. Guillemot and razorbill too.
The cliff top is scattered with broken egg shells , some inscribed with dark patterns, some dribbled with blood. Debris from predation by skuas and black backed gulls. A life and death struggle on cliffs of breeding seabirds. Flora enhances the scene: squill, northern marsh orchid , fading primroses, thrift, sea campion. In fresh water runnels that tumble the cliff edge there are  marsh marigolds and butter wort.  And scurvy grass  has a particular fragrance.
I love the architecture of sea-stacks. Tilted toward the sea, with the stratification of a pack of well-thumbed cards, a rock platform supports a mass of rock through which we see daylight: a delicate column with entablature of lichened rock topped with sea-pink,  flowers set against the sea. The plant is abundant in this maritime heath. Sea stacks appear to be the location of choice for early Christian hermits, rubbing shoulders with all things Norse and mythic.
The Vat of Kirbister casts its spell over us. 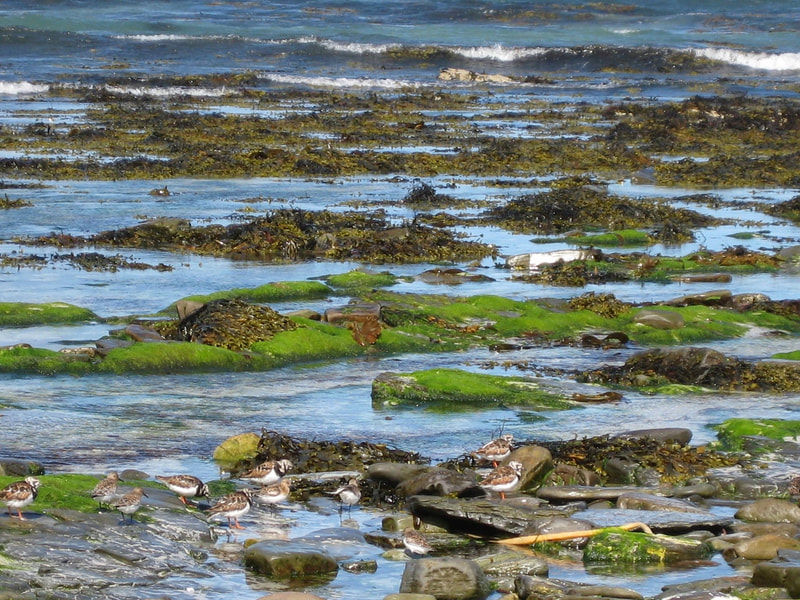 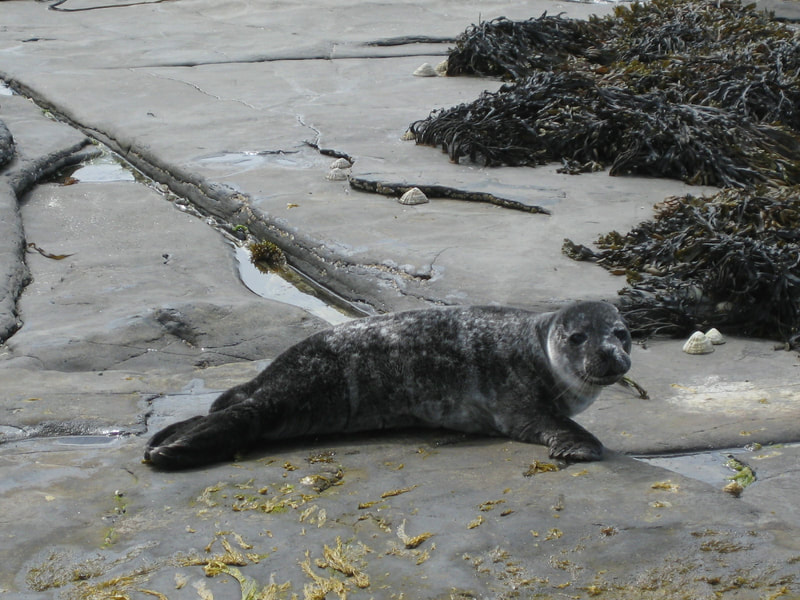 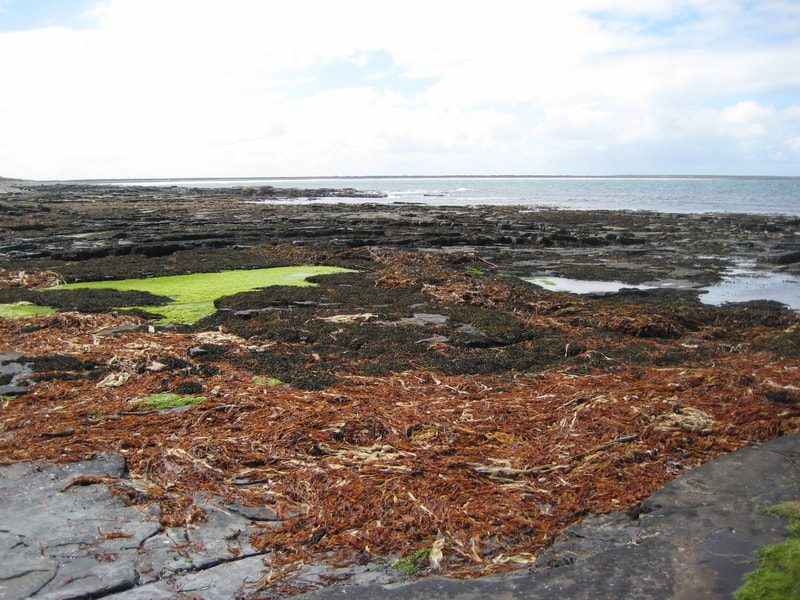 Sanday 14 June
Sunset walk from White Mill Bay along the beach, with rollers across the north of Ronaldsay Firth, to Wind Mill Point along the dunes as the tide is up close. Saltings over the dunes. To the mound of Heelie How. ‘Cows with calves can be aggressive’, reads a notice at the start of our route!  Beyond the headland, darkness closed in as a squall approaches and suddenly cows loom and it is impossible to see that they are beyond an electric fence. After the squall, a rainbow over Otter’s Wick and wonderful light toward the setting sun, cast onto the brackish water of the saltings.  Grunted at and dived at by arctic terns defending their nests- our hoods are up because of the wind and rain. Birds are still flying as the light fades but after the squall it grows lighter again.  Hot drinks back at the car with the setting sun and the moon both up over the dunes. It is 11 pm when we return.
We sail in the afternoon for mainland. And our  farm cottage at Grimbister where Orkney cheese is  made from the milk of their fine herd of Holstein Friesians.
Sandquoy beach: intense colour, wind and sun. There are fulmar close concealed amongst tussocks of grass in a ridge of dune.  We watch two gannets in perfectly synchronized dive and marvel at it.  Amethyst jellyfish and mounds of weed. And foraging amongst the seaweed are sanderling and turnstone and their prints pattern the firm, wet sand.  We sit on a rock to watch and then I creep closer and closer to take photographs until they fly.
Crow Taing headland is utterly lovely. Bright sunlight renders colours intense. Ringed plover fly calling over the rocks and come down to forage. We come upon a grey seal pup which might be only a week old. The pup is alone and when it begins to yelp I thought we were distressing it so suggest we move off, but it begins to slither over the rocks in pursuit of us with that strange, haunting cry. It is sleek and plump but has not yet put on enough blubber to lose its shape, as the adults do. There are slabs of flagstone with the patterns that form when mud dries and cracks into tile-like form, and an in-fill of fine gravel between the rocks. Rock pools, bright green weed and orange tangles that resemble kitchen mops. The collection of cottages where we begin and end our walk, at Tofts, looks a fine place to stay.
To Cata Sands. A long stretch of beautiful sandy beach where Cumulus cloud and sunlight enhance the sweep of it. 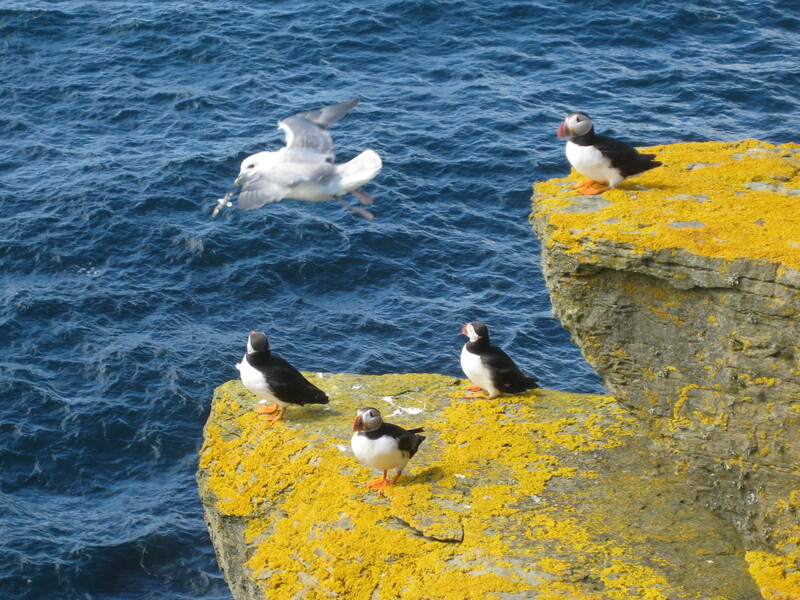 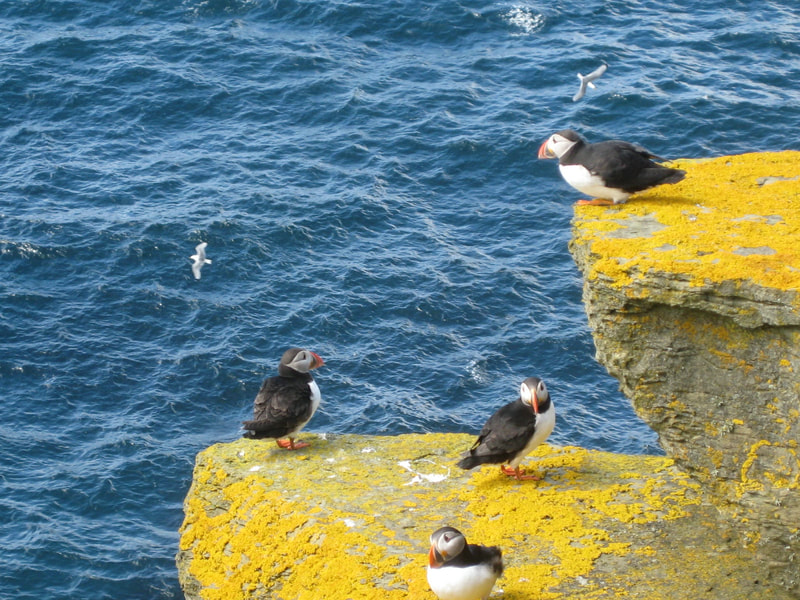 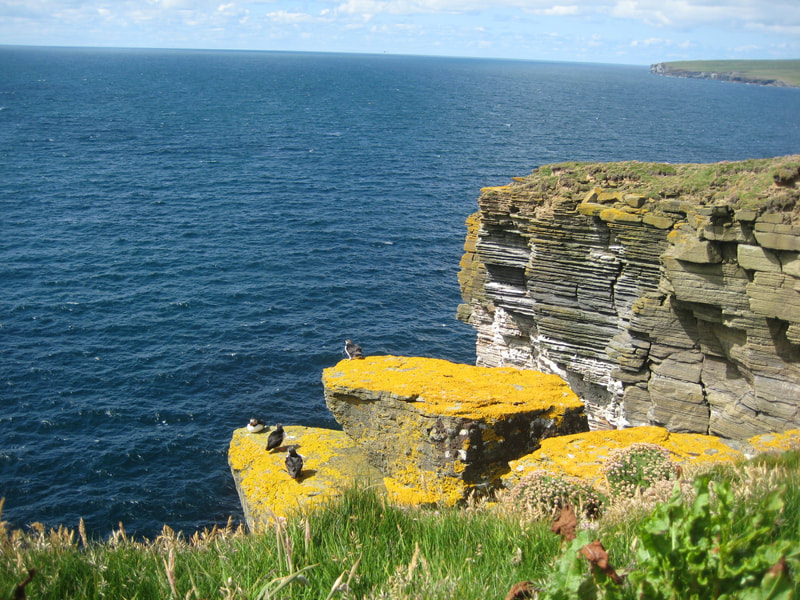 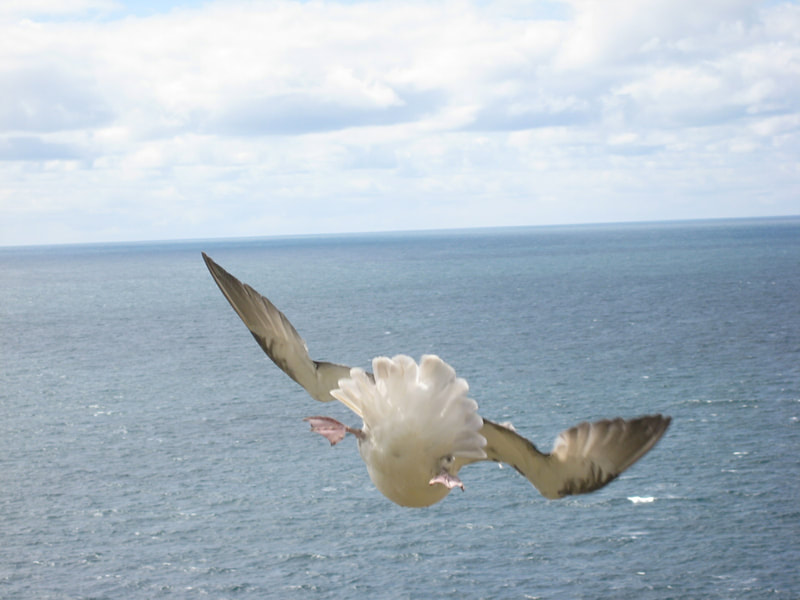 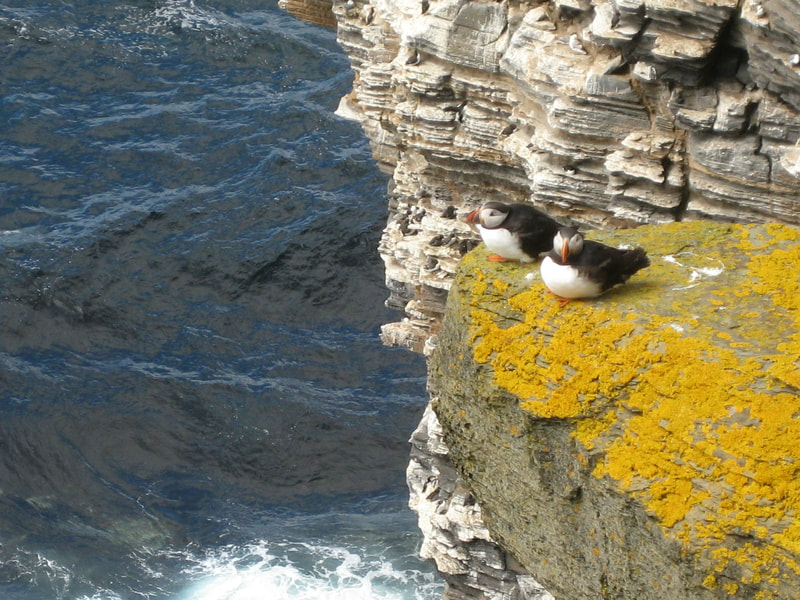 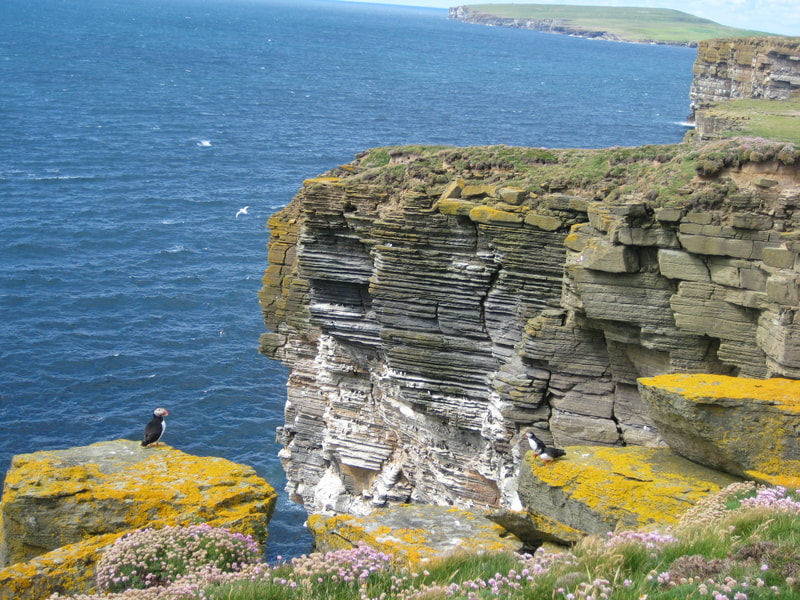 The Castle of Burrian, in particularly strong NE winds, is a delight. There are white horses and a flotilla of puffin on the sea. The cliffs are lush with sea plantain, thrift, thyme, white clover and bird’s foot trefoil. En route for the castle, a sea stack which was an early Christian hermitage, we spy puffin high on the cliff and  below our narrow footpath bordered with flowers. We creep close, closer, to see a pair of puffin beside their burrow- seen through a fine screen of flowers and with a backdrop of a sea of intense blue.
To the headland, where the castle-stack is home from May to mid-July to fulmar and a colony of puffin. One flies in with a beak full of sand eels and kicks up soil  at the entrance to its burrow. We sit in a depression as close to the cliff edge as we might, and with the best shelter we can find- which is little. A group of puffin bobs on the sea and others fly about the stack. Cold and windswept, we return glowing and drive to Skelwick Bay in lashing rain and wind, breakers impressive and a feeding frenzy of black headed gulls dipping in the waves close to the shore where a mass of seaweed is washed up and starling forage in the thick debris.
We learnt about the kelp industry and see old photographs of women out on the shore gathering tangles and drying and burning them to make kelp. What inordinately hard physical work it was.
Noup Cliffs nature reserve on the west coast of Westray holds Orkney’s largest seabird colony. With maritime grassland habitat along the cliff tops. We drive to the lighthouse on Noup Head in strong winds and we go up to the trig point to see the guillemot, kittiwakes, razorbills, puffins, black guillemots which breed there. Gannets are, uniquely, a success story here.  They first nested here in 2003 and a couple of RSPB wardens are staying at Bis Geos and they go out to Noup Head to count them and record 45 nesting pairs. Arctic tern, being sand eel dependent, are in trouble. Kittiwake, a call I have loved from childhood, are hardest hit being shallow feeders. Black guillemot, on a diet of butter fish, fare better. With no more than half a degree of warming sand eels migrate north in pursuit of plankton. Pipe fish, a substitute, have no nutritional value. Razorbill in Norway are in poor breeding condition, finding no food during winter.
A squall takes me unawares and soaks through my winter paramos. Comforting to be offered a duvet gilet and a pair of dry gloves.